There are many aspects of story-writing to delve into, such as who’s perspective is the story being told; the use of language and imagery, how to show the reader what is going on so that they experience the action, how to flesh-out a story with interesting detail and convey emotions. This blog is an at-a-glance guide that focuses on the key components of a story. There is always a beginning, a middle and an end. Making up the begining is the character, what s/he wants and the setting. Sandwiched in the middle, is the plot or unfolding order of events leading in the end, to a resolution.  This is all shown in the first two boxes of the diagram below. 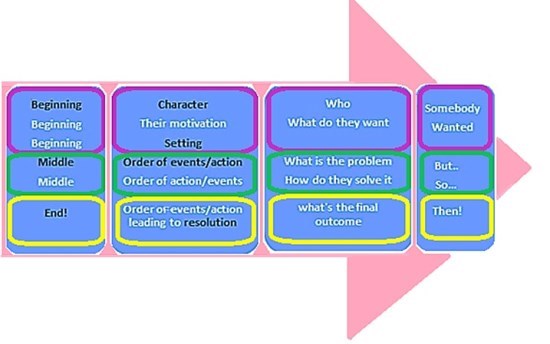 The 3rd box further breaks down, as questions, what writers must ask themselves to develop and move the story along. The final box (primarily for younger writers), simplifies these aspects of a story — as scaffolding made up of 5 prompts.

What and how much should a writer tell the reader is also important to the story and needs clarifying. For general fiction, a good guideline to follow is to use simple and quick explanations whenever possible. In other words, the beginning of a story requires the most explanations, while introducing new characters and indicating their relationship to the protagonist or other main characters. To bring the story to life or help the reader imagine it in their minds involves a careful balance (with enough detail), between showing and telling how the characters and events unfold.

A tip to encourage creative writing in your child

Not only do we feel very strongly about this topic, but it is also one that is very close to our hearts. Creative writing is a form of self-expression and a trait that forms a very crucial part of our

How to tell if registering your child for the 11+ Exams is the right choice for your child.

The 11+ exam season is here again, and you might be thinking of registering your child for the 11+ exams at some point, but are not sure of whether to do so. It is quite easy to get caught up

As the countdown begins for your child to go back to school, the panic sets in all over again, as it did at the beginning of the break. Is your child going back to its old school, or is he/she